Our Story  by Yvonne Wutka

This is the story of how we came to this place in our lives where we want to be missionaries.  It goes back 20 years so go grab yourself a cup of coffee or Chai latte (my personal favorite) and find a comfortable spot to get cozy and read Our Story.

My heart for missions began when I was in High School.  I went to Hillcrest Lutheran Academy, a Christian boarding school.  It was there that I learned of the importance of missions all over the world.  They would dedicate a whole week each year to learning about missions.  After I graduated, I went on my first mission trip to Pasadena, California and loved it!  I spent one week in Minneapolis, MN in training and then two weeks in Pasadena helping a church with their summer Vacation Bible School program.  It was there that I got to experience for the first time, praying with a child who was asking Jesus into her heart.  I would have liked to have been able to follow up with her over the months and years to come and make sure she really understood what she just prayed for but it was only a 2 week mission.  Because of that, I started to feel that it would be important to serve on a more long term mission trip.  I had heard of some 6 month-1year long mission trips to Japan or Europe that I thought I’d like to do some day.  However, I was already enrolled in college courses and figured the opportunity would come up again in the future, possibly after I graduated.  Well, the summer after my freshman year, I started dating Rob.  We fit together like coffee in a cup.  We both believe that we were (and still are) a match made in heaven and that God created us for each other.  There was only one problem.  This guy loved his small town life and really wanted to live there his whole life.  He would rather not even visit a city ever again unless it was to go to a Red Sox Game.  How did that fit into my doing missions?  I talked myself into believing that the “foreign mission thing” must have just been a dream that I had and not a plan that God had for my life because I knew without a doubt that Rob was the guy I was supposed to marry and was willing to live in the same small town my whole life.

Fast forward 7 years.  We had a 3 year old and a 6 month old when Rob was required to go on a 2 week business trip to Tokyo, Japan.   Now there’s a big city!  He absolutely loved Tokyo and came back ready to move because he was offered a 3 year position there.  Wow!  What a change of heart.  This was not a mission trip and we ultimately decided it wasn’t the right thing for our family.  That experience did open him up to the possibility of living elsewhere though.  God still needed to prepare us.  In the summer of 2007 we began attending a new church where we became very active and really started to know and grow with God.
Summer of 2008 was our first year attending Camp Spofford, New Hampshire as a family.  We were sitting in a chapel service there, where we listened to some staff members speak about uprooting their family and moving to Kenya, Africa.  For over 2 years they served as house parents in a missionary school dorm.  They told the story of how they came to adopt their son from Kenya.  It was totally a God thing and I leaned over to Rob and said, “We should do something like that.” Meaning take in an orphan.  He simply said, “Yes.” And the decision was made.  I had worked with several foster children in my line of work as a Marriage and Family Therapist and saw the need for good foster homes for these children.  We began the process of becoming foster parents that fall when we went to our first DCF open house meeting.  We were licensed in fall of 2009 and got our first placement on Feb. 1, 2010.  She was a 19 month old blue eyed blond who looked exactly like our second born child.  She immediately fit right in with our family.  After two emotionally tumultuous years, we adopted her in March 2012.  I wouldn’t trade those tumultuous years for anything though because it was during that time that we knew that we had absolutely no control over the fate of this child.  It was completely in God’s hands and we grew in our faith as we learned to trust Him in a way that we had never needed to before.

In 2010, Rob went on his first mission trip to Tennessee to help with flood victims.  His experience in building was needed as well as the need for another male chaperone since there were several youth from our church going on this trip.  He loved the experience of being immersed in serving for an entire week.  Shortly after that we learned of an opportunity through Camp Spofford where they were planning a family mission trip to Camp Roblealto in Costa Rica.  We both eagerly signed up for this trip scheduled for September 2011.

In the months leading up to that mission trip, I began to question why I was going and if I really had a purpose.  We kept hearing about building projects that the camp needed done, nothing that I felt capable of doing.  During my Bible reading and prayer time that summer, God let me know that He had a purpose for me in going and it was going to be BIG!  While there, I did a lot of painting with the other women on the trip while the men renovated cabins.  The BIG thing that happened was that we visited the orphanage up the street that is affiliated with the camp.  We left there feeling like loving children in an orphanage was something that we would enjoy and be able to do.  Upon returning home, I had a conversation with another member of our church who had also been on a mission trip to Costa Rica.  He informed us of 6:8 Ministries, the mission where he served, and how they were planning on starting an orphanage.  He hooked us up with their contact info.

In April 2013 (after more than a year of skyping and e-mailing), we had the opportunity to visit 6:8 Ministries in Alajuelita, Costa Rica where we got to meet the staff and some of the leaders of the mission.  This is a barrio in the capitol city of San Jose, the poorest per capita in the country.  After a few days of being there we were walking down the street to the church that 6:8 Ministries had planted 3 years prior, and Rob stated, “I feel like I am home and these people are my family.”  That was when we made the decision that this is where God wants us to be.  Upon returning home, the children’s first question was, “So, are we moving?”  We hesitantly answered that, “Yes we are,” and they cheered.  That was yet another confirmation that God wants us in Costa Rica.  Little did we know that not only had God been working in our lives, He had been working in our children's hearts as well.  It has amazed us to see how each one of our 4 children have a vision of their own of how they are going to contribute to this mission in Costa Rica.  They are very excited to serve God by helping others in Costa Rica and add to their heavenly treasure box.

Rob had the opportunity to spend 5 days in Costa Rica with the staff and board members of 6:8 Ministries from 9/5/13 – 9/10/13.  They served together and were able to spend a lot of time discussing God’s will for the ministry in Costa Rica.  Everyone was in agreement that the primary focus of every aspect of the ministry must be to share the Gospel message and the saving grace of Jesus.  The last 2 days of the trip were spent out at the property that will soon be transformed into the Children’s Ranch.  That is where we hope to live by the end of 2014.

Thanks for taking the time to read Our Story.  We thank you for your prayers and support. 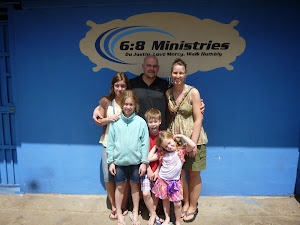